Collins to Stay on at NIH; Two Other Leadership Positions Announced

On June 6, the President announced that National Institutes of Health (NIH) Director Francis Collins will stay on as NIH director. As previously reported, Collins was asked to remain in the position in January by the new administration. Collins continues to enjoy support of the Republican leadership of committees with jurisdiction over the NIH. He was officially appointed to the post despite a May 22 letter from 41 conservative House members urging the President to appoint someone whose views are more aligned the Administration’s “pro-life direction,” citing embryonic stem cell research and human cloning as examples. In addition, NIH recently announced the appointments of Norman E. Sharpless as the next director of the National Cancer Institute (NCI) and Christine Hunter as Deputy Director of the Office of Behavioral and Social Sciences Research (OBSSR).

On June 12, Collins announced the appointment of Dr. Norman E.  Sharpless as the next NCI director. Dr. Sharpless is currently serving as the director of the University of North Carolina at Chapel Hill (UNC-CH) Lineberger (NCI-designated) Comprehensive Cancer Center and as the Wellcome Distinguished Professor in Cancer Research. Sharpless earned his undergraduate and medical degrees from UNC-CH and completed his medical residency at Massachusetts General Hospital and a fellowship in hematology/oncology at Dana-Farber/Partners Cancer Care.

OBSSR Director William Riley also recently announced the appointment of Christine Hunter as Deputy Director. She will begin her tenure August 7. Hunter is currently the Director of Behavioral Research at the National Institute of Diabetes & Digestive and Kidney Diseases (NIDDK) and is a Captain in the U.S. Public Health Service (PHS). At NIDDK, Dr. Hunter led the revision of the NIH Obesity Research Strategic Plan “and developed and led the NIDDK Centers for Diabetes Translation Research,” according to an announcement circulated to OBSSR staff.

Dr. Hunter serves on the National Collaborative on Childhood Obesity Research (NCCOR), the Opportunity Network for Basic Behavioral and Social Sciences Research (OppNet), the Science of Behavior Change (SOBC), and the Behavior and Environment Subcommittee of the NIH Obesity Research Task Force. As a member of the NIH Behavioral and Social Sciences Coordinating Committee, Dr. Hunter served on the NIH OBSSR Strategic Plan Working Group.

The National Institutes of Health (NIH), led by the National Cancer Institute (NCI) and in conjunction with the U.S. Department of Veterans Affairs, is supporting a training institute designed to provide participants with a “thorough grounding in conducting D&I [dissemination and implementation] research in health across all areas of health and health care.” The Training Institute for Dissemination and Implementation Research in Health (TIDIRH) is open to investigators at any career stage interested in conducting D&I research. The training will be conducted both online and a during two-day in-person training session in Bethesda, MD, from August 14 through December 1, 2017. Applications are due June 21, 2017.  For more information, see the program website.

Posted on August 9, 2016 by COSSA
The Society of Behavioral Medicine (SBM), a COSSA member, in collaboration with the National Cancer Institute (NCI), will host a webinar on Friday, August 12 from 1:30 p.m. to 3:00 p.m. designed to share information about new priorities in behavioral research from NCI in areas such as cognition, integrated data analysis, and cancer communication in new media. Associate Director of the NCI Behavioral Research Program William Kleinwill provide an overview the funding opportunities. To view the webinar register here. The associated NCI Funding Opportunity Announcements are: 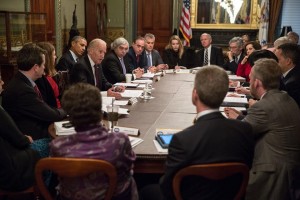 On February 1, the White House announced a new $1 billion initiative to jumpstart the new national “moonshot” initiative announced by President Obama in his 2016 State of the Union Address. The President established the White House Cancer Moonshot Task Force via a presidential memorandum, which will be led by Vice President Biden. The goal of the initiative is “to eliminate cancer as we know it.” The Task Force’s membership will include the leadership of the Departments of Defense (DOD), Commerce (DOC), Health and Human Services (HHS), Energy (DOE), Veterans Affairs (VA), and the Office of Management and Budget, National Economic Council, Domestic Policy Council, Office of Science and Technology Policy, Food and Drug Administration (FDA), National Cancer Institute (NCI), National Institutes of Health (NIH), and the National Science Foundation, among others as designated.  NIH is directed to provide “funding and administrative support” for the Task Force. Additionally, the presidentially-appointed National Cancer Advisory Board (NCAB) is directed to also serve on the Task Force and is “strongly encouraged to establish a working group consisting of a Blue Ribbon Panel of scientific experts.” The Task Force is charged with producing a detailed set of findings and recommendations and delivering a report to the President before December 31, 2016.

The $1 billion initiative will provide research funding to “accelerate the development of new cancer detection and treatments.” It includes $965 million in funding for new cancer activities at the National Institutes of Health (NIH) in fiscal year (FY) 2016. For FY 2017, the President’s budget request will include $755 million in mandatory funds for activities at NIH and FDA. In addition, DOD and VA are directed to increase their investments in cancer research through the funding of “Centers of Excellence focused on specific cancers, and conducting large longitudinal studies to help determine risk factors and enhance treatment.” The initiative’s HHS-supported research areas also include prevention and cancer vaccine development, early cancer detection, cancer immunotherapy and combination therapy, genomic analysis of tumor and surrounding cells, enhanced data sharing, and pediatric cancer. FDA will support an oncology Center of Excellence to “leverage the combined skills of regulatory scientists and reviewers with expertise in drugs, biologics, and devices.”

The National Cancer Institute (NCI) recently released a series of funding opportunity announcements (FOAs) designed to enhance the diversity of the NCI-funded cancer research workforce. The awards support individuals from groups that have been shown to be underrepresented in the biomedical, behavioral, social, and clinical sciences. The Institute notes that a major obstacle to developing a stronger national health disparities cancer research effort has been the lack of significant strategic training programs for students and scientists. It further notes, “Greater involvement of students and scientists from underrepresented backgrounds is integral to a successful national cancer research effort involving more underserved patients and populations.” END_OF_DOCUMENT_TOKEN_TO_BE_REPLACED

The National Cancer Institute (NCI) recently issued a funding opportunity announcement, Cancer Prevention, Control, Behavioral Sciences, and Population Sciences Career Development Award (PAR-15-033). The award supports the career development of junior investigators with research or health professional doctoral degrees who want to become cancer-focused academic researchers in cancer prevention, cancer control, or the behavioral or population sciences. The award provides salary and mentored research support for a sustained period of “protected time” to junior investigators who are interested in developing academic and research expertise in these health-related fields. NCI will contribute up to $100,000 per year toward the salary of the career award recipient and $30,000 per year toward research development costs.

For more information or to apply see the NIH website.

At the September meeting of the National Institutes of Health (NIH) Council of Councils, NIH Deputy Director Lawrence Tabak provided an update of the agency’s activities, including an update on the agency’s efforts to pilot “longer-term, stable support” for NIH investigators. END_OF_DOCUMENT_TOKEN_TO_BE_REPLACED