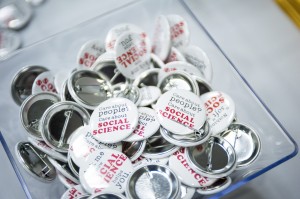 More than 100 social and behavioral scientists from across the country attended the 2015 COSSA Annual Meeting and related events on March 9-10. This week’s meeting featured a new format for the annual event, which included moving of the meeting from the fall when it had historically been held, to the spring in order to align with Congressional calendar. As part of the meeting on March 10, more than 60 COSSA members descended on Capitol Hill for the first-ever Social and Behavioral Science Advocacy Day. Advocates met with 84 different offices in the House and Senate to discuss the value of social science research and the critical role the federal government plays in supporting this research. Check out the next issue of the COSSA Washington Update for summaries of the meeting’s sessions.

COSSA has developed a series of resources to help its members articulate the value of social and behavioral science research to policy makers and the public. These resources include:

On February 26, the House Science, Space, and Technology Subcommittee on Research Technology held an oversight hearing to discuss the fiscal year (FY) 2016 budget request for the National Science Foundation (NSF). The hearing featured testimony from NSF Director France Córdova and Daniel Arvizu, Chairman of the National Science Board. END_OF_DOCUMENT_TOKEN_TO_BE_REPLACED

The Food and Drug Administration (FDA) has released draft guidance on using electronic media and processes to obtain informed consent in FDA-regulated clinical investigations. The guidance covers how and when electronic informed consent information should be presented, how to ensure subjects’ understanding of the information, how to maintain confidentiality and security, and how to keep appropriate documentation of the consent process.

FDA is seeking public comment on the draft guidance by May 8, 2015. Instructions and more information are in in the Federal Register notice.

The Office of Human Research Protections (OHRP) is soliciting comments on whether the FDA’s draft guidance is appropriate for research under the Office’s purview (regulated under 45 CFR 46). As part of an effort to harmonize agencies’ regulations and guidance for human subjects research, OHRP is considering issuing the final guidance as a joint FDA-OHRP document. The Office will consider comments received from the public in its decision making.

Comments to OHRP are also due on May 8, 2015. More information and instructions are available in a separate Federal Register notice.

A list of COSSA members’ annual meetings and other events can be found on the COSSA webpage.

COSSA members who have an upcoming event they would like to see listed in the Events Calendar and on our website should send an email to jmilton@cossa.org.