This week, the Trump Administration began releasing details of its fiscal year (FY) 2020 budget request. Like previous years, the budget proposes steep cuts that would damage America’s research and data enterprise. Full details of the budget are still in the process of being released this week. COSSA will be sharing its in-depth analysis of the proposal in the coming days. Below is a snapshot of some of the funding levels we know so far: 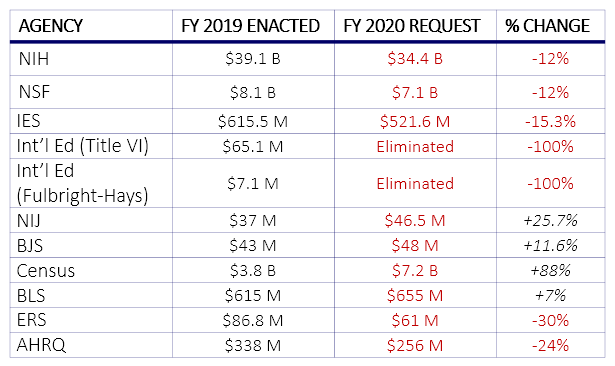 It is important to remember that the Presidents’ request is simply a proposal and is unlikely to become law. Congress has sole authority over appropriating funds. COSSA has signed on to a letter to Congressional leaders as part of the Coalition for National Science Funding (CNSF) encouraging Congress reach a bipartisan agreement to raise the budget caps for non-defense discretionary spending and recommending an increased appropriation of $9 billion for the National Science Foundation in FY 2020.