On June 9, the National Institutes of Health (NIH) Chief Officer for Scientific Workforce Diversity Hannah Valantine updated the NIH Advisory Committee to the Director (ACD) on the findings and recommendations of the ACD’s African American/Black Funding Disparity Working Group. Valantine presented the key findings of the Working Group followed by a discussion of how the Working Group framed its suggestions regarding NIH’s plans to address the issue in the coming months. She reported that the Group’s analysis found that there are funding disparities at every stage of the application process from submissions to funding. In particular, the analysis found that African Americans submit fewer applications, noting that it is a “miniscule applicant pool and even within that small pool there are fewer number of applications per applicant.” Compounding the issue is that there are fewer resubmissions from African Americans. The Working Group found that the initial review score drives resubmission and there is a small component involved as it relates to the research topic. Based on the data and the ongoing analysis, Valantine stressed that the “work needs to continue to be done and NIH needs to continue a vigilant eye on the issue.” 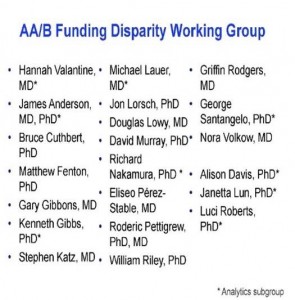 The Working Group identified three areas that could serve as targets for intervention:

Particularly, further study is needed to understand what really defines the current state-of-the-art research in the areas of health disparities and minority health research, Valantine suggested, highlighting that NIMHD Director Elesio Perez-Stable is leading the way on this effort (see Update, September 22, 2016). The good news, she reported, is that the Working Group did not find any disparity in the use of Institutes’ and Centers’ select pay. Regarding the review process, Valantine announced that Center for Scientific Review (CSR) Director Richard Nakamura is getting ready to launch a “definitive study” designed to examine bias in the peer review process.

The first experimental intervention proposed by NIH is a Mentoring/Coaching Pilot for Application Preparation, an expansion of the existing National Research Mentoring Network (NRMN), with the goal to increase R01 submission and resubmission, thereby improving chances for success in obtaining an NIH R01 grant. According to Valantine, the pilot program would include a cohort of up to 20 mentees with two NRMN professional-development core models. 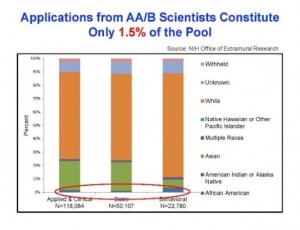 The second experimental intervention would be an application information and knowledge trial linked to the pilot study described above. The goal is to “provide facts about the application and review processes that link application score to funding likelihood [and] raise awareness about increased funding success from re-submissions.” The outcome measures for this trial would be the number of resubmissions and survey responses.

The third experimental intervention would be the CSR-Led Anonymous Review Study to assess potential bias in peer review. It would consist of three cohorts: African American applicants, matched samples of white applicants, and a randomly selected sample of white applicants. Applications would be anonymized and there would be multiple reviewers per application. Outcome measures include “resulting scores for differences that may be due to race awareness, institution reputation, sex, and seniority.” If there is bias in peer review, the scores of the anonymized applications will improve relative to those that are non-anonymized.

Valantine emphasized that there would be an ongoing analysis on topic choice. Disparities are not the result of the quality of the science, Valantine declared, because there was no difference in the citation characteristics for those actually funded. Noting that the work in this area is preliminary, she acknowledged that additional scrutiny is needed.

Responding to questions regarding why there are so few scientists of color participating in the NIH community, Valantine noted an article she and NIH director Francis Collins co-authored discussing her office’s focus on diversity. Understanding the science of diversity will need to involve sociologists and anthropologists to help NIH figure out the science behind it and the extent to which social and psychological factors that impinged upon enhancing the diversity affect what NIH is doing to address it. She emphasized the science of diversity is “probably more complex than any other of the science” supported by NIH.

Collins and Nakamura expressed their support when asked about providing opportunities for junior researchers to serve ad hoc on study sections as a means to improve grant-writing. Nakamura explained that CSR implemented the Early Career Reviewer Program in 2011, which recruits new assistant professionals and newly independent scientists to participate in “abbreviated reviews” in which they join two to four reviews under the observation of the study section chair and the Scientific Review Officer (SRO). Participants have given high ratings to the program for helping them to understand the peer review process. According to Nakamura, the SROs have been encouraged to select early career reviewers for participation, particularly underrepresented minority scientists.

The full ACD discussion is available on the NIH website.