On October 26, Richard Hodes, director of the National Institute on Aging (NIA) within the National Institutes of Health (NIH), provided a progress report on the development of a bypass budget to the National Alzheimer’s Project Act (NAPA) Advisory Council on Alzheimer’s Research, Care, and Services. The “bypass” or “professional judgment” budget is transmitted directly from NIA to the President and Congress without being revised through the traditional Federal budget process. Hodes explained that a series of meetings between 2012 and 2015 provided the basis for the comprehensive set of priorities, milestones and budget estimates included in the congressionally-mandated bypass budget (P.L. 111-375). Thirteen of the 27 NIH institutes and centers provided feedback on the potential scientific gaps and priories in the combined milestones. The milestones incorporate the input of the extramural research community which held a trans-NIH staff review and discussion, and were edited to ensure there were a “comprehensive inclusion of priorities” for FY 2017 (see Update, August 10, 2015). 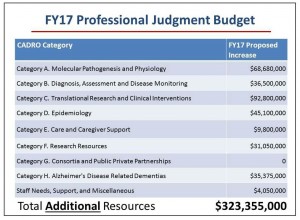 Hodes reported that the FY 2017 professional judgement budget would provide $323.4 million in additional resources to support Alzheimer’s disease (AD) research. He also pointed to language in the FY 2016 House and Senate Labor, Health and Human Services and Education bills that propose $350 million in funding for AD research, which is still waiting for approval by Congress (see Update, June 30, 2015).

The category for “Consortia and Public Private Partnerships” in the professional judgement budget does not have funding assigned to it because no additional funding is being requested for public/private partnerships in FY 2017. The agency, however, is currently engaged in a number of partnerships and plans to continue to support them. Future partnership opportunities will be evaluated as they arise.

Hodes noted NIA’s release of ten AD research funding opportunity announcements (FOAs) scheduled to be funded in FY 2016 (see related story). Also, the National Institute of Neurological Disorders and Stroke (NINDS) within NIH is expected to release additional FOAs in the near future.

To maintain ongoing assessment (i.e., what we know), Hodes reported that NIH has “launched a two-part assessment of the science of prevention strategies for Alzheimer’s-type dementia, amnestic MCI, and age-related cognitive impairment.” The National Academy of Medicine (NAM) (formerly the Institute of Medicine) and the Agency for Healthcare Research and Quality (AHRQ) have established a joint committee to assess the systematic literature review that will be conducted by the University of Minnesota School of Public Health Evidence-Based Practice Center (EPC). The NAM committee will examine the EPC’s findings and recommendations as they relate to what information can be given to the public about prevention and intervention strategies and the existing research gaps in the literature. Hodes emphasized that input from the public will be solicited at multiple points and the study will not duplicate the IOM Cognitive Aging Study.